On the day when we learned UoN students had occupied the Trent building in support of UCU strikers, we’re devoting our diary entry to student action via three key moments as archived on Twitter.

First, we have the student occupation of the Trent Building and their collective statement of solidarity.

Occupying the Trent building overnight, students from the UoN Solidarity Support Network quickly issued a statement demanding better pensions and pay for staff, as well as an end to outsourcing and casualisation.

Second, we have the letter sent to the VC by PhD students in the Horizon Centre for Doctoral Training

Inspired by students from Geography (see below), students in Computer Science sent a heartfelt letter to the VC supporting staff and outlining their concerns about the future of HE.

And third, we have an image of what a student boycott looks like in practice.

Our third entry comes from one of our hourly paid tutors, compelled to cross the picket line by UoN’s casualisation practices.

Today’s strike diary comes from Sally Hanford, one of our APM members in Libraries.

It’s 6am on day 5 of the strike – the alarm goes off and I think about how cold it is outside the bed – look outside to see the car covered in frost and think how many layers I’ll need to survive the four hours of picketing ahead.

We start at 7.30am – its cold and dark as I approach West Entrance expecting to be the first there but as usual two students are already there. These two have been at every picket at West staying from 7.30 to 11.30 despite being bitter cold. Why? They realise that future generations will suffer the consequences of inaction now. Thanks to these two for the tips for how to survive without getting frozen to the core. The hot water bottle in the backpack worked wonders today and the hot drinks provided by Unison were very welcome.  Thank you !

I work in the libraries (learning technologies) supporting staff in the Faculty of Arts. It’s great to see members of the Faculty on the picket line as the morning progresses. Folk from Physics join us along with representation from elsewhere in Science. Today we’re planning a rally at North Entrance and we all move on up Derby Road thankful for the chance to get moving and warm up a bit!

After a sing along (Solidarity Forever) and rousing speech from Matt  a bunch of us head over to Jubilee Derby Road entrance for full on musical action (with trumpet and tambourine!) where Pete, Mary, Howard, Sharon and co are doing it in style with tables of food and a fire to keep us warm. We finish with a rendition of Bella Ciao and head off to warm up and recharge our batteries for next week.

If you haven’t joined us yet on the picket line please do come along to your nearest uni entrance. Remember (in the words of Joe Hill)  ‘it all amounts to nothing if together we don’t stand’.

I’m going to start my Thursday strike diary on Wednesday night because this is when Agnes Flues (branch Vice-President) and I attended the Nottingham College UCU ‘victory party’ at the ‘VAT and Fiddle’. The event was organised to recognise and celebrate the extraordinary achievement of Nottingham College UCU members in their campaign against the imposition of a ‘sign or resign’ contract that increased teaching hours and also cut the pay of a significant number of staff.

“Nottingham College UCU members took 15 days of strike action, as a result of which they ‘won everything’ to quote a UCU regional official speaking at the event.”

The meeting was addressed by UCU General Secretary Jo Grady who described the strike as ‘a dispute of national significance’. Jo went on to highlight the importance of solidarity, and what can be achieved when we act collectively. She argued that there was much to learn from the dispute and that the experience of Nottingham College UCU acted as an inspiration to those of us in higher education who are now involved in our campaign on pensions and the ‘four fights’.

I was able to address those attending on behalf of University of Nottingham UCU and offered my congratulations to those present. I also highlighted the need for us all to work more effectively across sectors and to link our campaigns across not only universities and further education, but also connecting with the school sector unions. All our institutions experience growing managerialism and an absence of democratic control that can only be addressed by radical, cross sector, system reform.

The later-than-was-sensible night due to the party meant that today’s alarm bell was particularly unwelcome and for the first time since the strike started I found myself hitting the snooze button. This didn’t however stop me getting to Jubilee campus for 7.30am and helping set up our three picket lines.

Since Monday UCU members on Jubilee campus have organised solid picket lines at all major entrances – on Wollaton, Derby and Triumph Roads. Following the USS strikes in 2018 we are now a well-oiled machine and several members have considerable experience of getting ourselves set up and ready to engage with students and members of the public.

“Throughout the strike spirits have been high and it has felt good to recapture the energy, collegiality and sense of collective strength that was such a powerful feature of our experience in 2018.”

Meeting new colleagues, sometimes new UCU members and very many students was always one of the highlights of 2018 and it is great to be able to re-create those experiences again.

Our picketing ended just before lunch with a discussion about plans for the ‘picket party’ we will be holding at the Derby Road entrance on the last day of our full week strike (Friday 29th from 10am). There will be music, food to share and lots of discussion. All UCU members and students welcome! 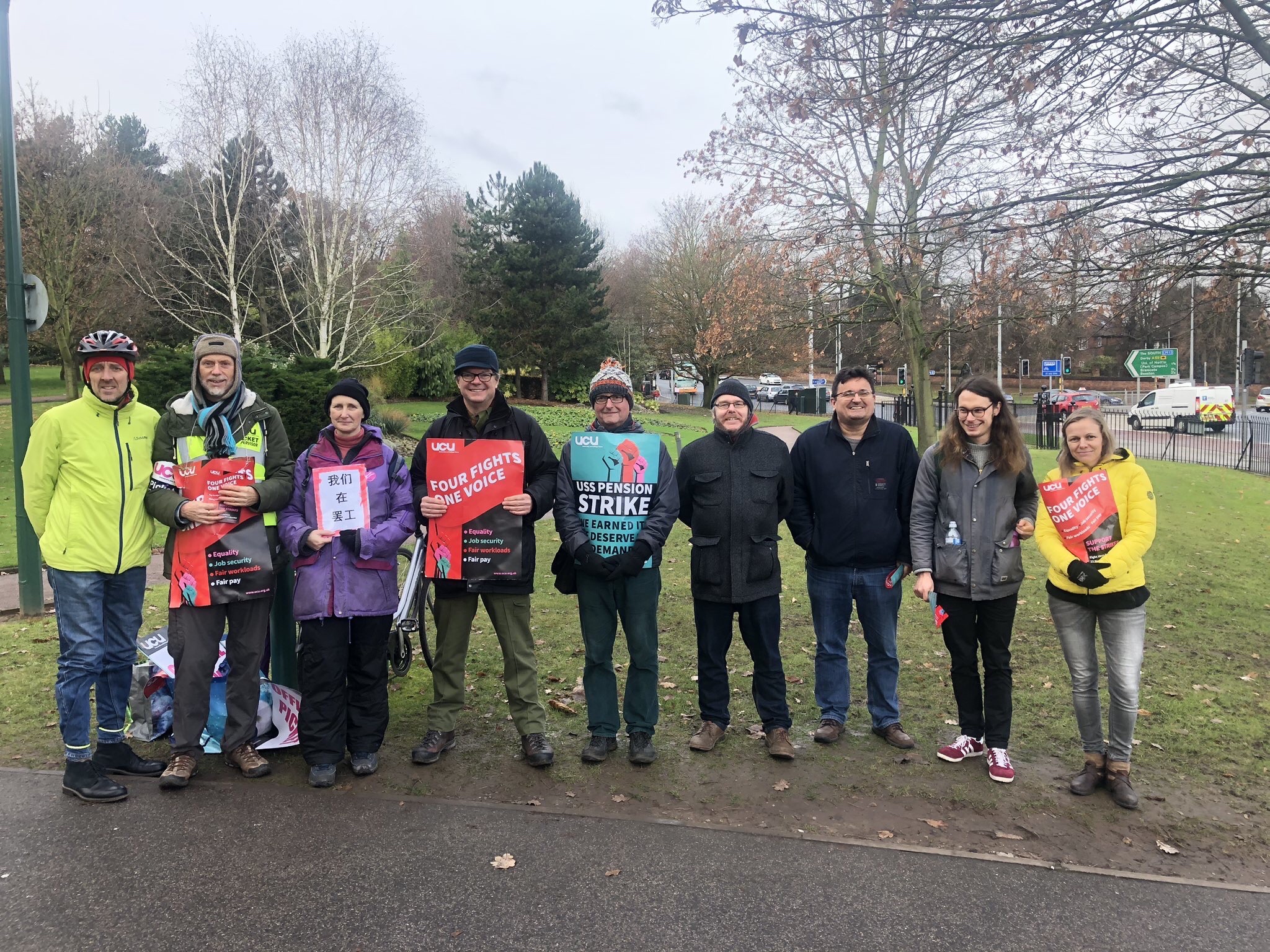 Remember our end of week 1 gatherings will take place at UP North/East and Derby Road on Jubilee.

Today’s strike diary comes from two UCU members who are not striking. Here are their stories:

“We are not deemed worthy enough to be employees of the University of Nottingham…. Whilst we are unable to (legally) withdraw our labour … we will continue to stand… in solidarity with UCU members in the battle for a more secure future for us all.”

Instead, we are defined as ‘temporary workers’, operating under a ‘contract for services’ arrangement where we are “supplied [by Unitemps] to render services to the Client [UoN]” for a defined period of time. We have been stripped of employment rights (such as access to grievance procedures), and are disposable and replaceable without notice despite the fundamental front-line roles we play in the day-to-day operation of this university (in one Faculty of Arts dept. this semester, PGR teaching staff account for almost 50% of its weekly seminar hours/30% of its total weekly teaching hours).

If you work with any PGRs, it is under these circumstances that they must carry out their work. So, whilst we are unable to (legally) withdraw our labour in the fight against the multipronged attack on our current and future working conditions, we will continue to stand – where and when we can – in solidarity with UCU members in the battle for a more secure future for us all.

I will be teaching four seminars and holding two office hours over the course of the two weeks of industrial action that have now begun at universities across the country. I want to stress that this is not because I do not support the principles for which my colleagues are striking. In fact, it is because I am forbidden to participate on days which I am expected to teach.

This is the current reality of being a postgraduate teacher at the University of Nottingham, someone whose labour senior management does not value enough to contract properly as an employee of the University. Instead, I am on a zero-hours, hourly-paid contract with an external temp work organisation. Because of this, in addition to being excluded from benefits like sick pay and compassionate leave, I am also not part of the University’s agreement with the UCU when it comes to participation in industrial action. If I attempted to strike, it would be in breach of my contract.

“Casualisation is just another symptom of … the wider marketisation of education that is underpinning … the current strikes. If you are striking, please know that many of your postgraduate teaching colleagues are behind you … please turn up to the picket on our behalf.”

While casualised contracts for postgraduate teachers are disappointingly common across Higher Education, the University of Nottingham is one of the worst offenders, in entirely outsourcing these contracts to Unitemps. Casualisation is just another symptom of institutional greed and the wider marketisation of education that is underpinning all of the reasons for the current strikes. If you are striking, please know that many of your postgraduate teaching colleagues are behind you even when we can’t be there on the ground, please turn up to the picket on our behalf as well, and know that many of us will be standing beside you when we are not being forced to teach.

Please note that images are for illustrative purposes; they depict events that took place today but are not directly linked to the stories above.

Watch out tomorrow for strike diaries from across our campuses!

I arrived 7.30am at South Entrance picket as the sky was starting to get light. The weather was predicted for rain but spirits were high among the picketers. We had maracas, a cowbell, a bike horn, and other noise makers; homemade treats were passed around; someone brought a canteen of tea. Motorists, lorry drivers, tram drivers, bus drivers, and motorcyclists honking/beeping in solidarity raised spirits. Lillian Greenwood MP for Nottingham South came to visit, and members from Nottingham Trades Union Council came to support us and to hand out information leaflets and hold up signs: ‘Nottingham staff and students stand together’; ‘Support our staff, Support the strike, Support the future’.

At 10.30am I visited the West Entrance, which was completely abuzz with picketers, music (a picket rave!), and lots of supporting students spreading information about the strike and encouraging passing students to register to vote. I participated in a collective reading of revolutionary poetry, in memory of poet and activist Sean Bonney who died recently. There were some very moving and energizing poems by Sean read out loud. My reading ended with the phrase: ‘Occupy the future’.

Student supporters at UP South

At 1pm I headed to the teach-out. There were two wonderful sessions: the first a feminist history of strike action, covering such strikes such as the 1910 Chicago garment worker’s strike, and the late 1970s Grunwick dispute led by Jayaben Desai, leading striking workers who were mostly female, immigrant, and East African or Asian. The second session was on student well being and the economic hardship faced by students, many who are forced to take unsustainable loan packages. It challenged my own assumptions about student experience and how their challenges relate to mine as a worker at the university.

At 2pm there was a ‘picket line dancing class’ in which I sacrificed my dignity for collective dance solidarity – and it was actually a lot of fun.